Cox’s legacy thrown out of whack 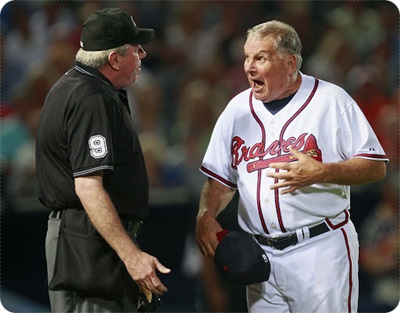 Cox and McGraw both have 130 ejections, but McGraw was thrown out 14 times as a player. Cox has 130 ejections as a manager, McGraw 117. Earl Weaver is third with 97.

It’s also unfortunate that Cox has become infamous for his short temper instead of lauded as the best manager of pitchers of his generation, possibly of all time.

Cox has coaxed All-Star type seasons out of young pitchers (Jimmy Key, Steve Avery, Kevin Millwood), ones near the end of their careers (Doyle Alexander) and those lost somewhere in between (Jaret Wright).

It’s hard to explain exactly why Cox has been so good at developing and managing starting pitchers.

Leo Mazzone was his pitching coach from 1990 to 2005. His best practices for pitchers included pitching twice between starts instead of once, using the outside corner of the strike zone and using a fastball to set up breaking balls.

Mazzone was an asset to Cox, but Cox knew how to manage pitchers before he employed Mazzone.

One of Cox’s strengths is he isn’t an overly intense manager (away from umpires). It’s hard to remember him having a publicized conflict with a single player.

His ability to work with and develop young players, including pitchers, is excellent. He never overreacted or even reacted to John Rocker’s free speech or Mark Wohlers’ control problems.

Cox isn’t afraid to field a losing team or finish third after 14 consecutive division titles, because he knows part of his job is developing players for the future.

This article originally appeared in The Washington Times on July 2, 2007.
Posted by Kevin Brewer