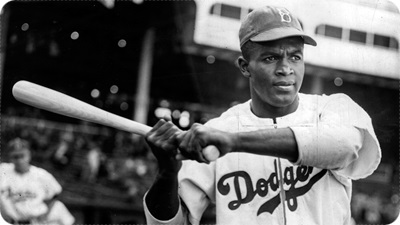 Major League Baseball unretired Jackie Robinson’s retired No. 42 last night in a gesture unworthy of Robinson — the player or the man. It began with Ken Griffey, who received special permission from Robinson’s widow, Rachel, to honor the 60th anniversary of Robinson integrating the major leagues.

It ballooned into more than 150 players planning to wear Robinson’s number on Jackie Robinson Day, including every member of the Los Angeles Dodgers, Houston Astros, Milwaukee Brewers, Philadelphia Phillies, Pittsburgh Pirates and St. Louis Cardinals. The Astros-Phillies and Giants-Pirates games were rained out.

The gesture fell flat, more absurd than noble. It wasn’t respectful. It was showy. It was more about players wrapping themselves in Robinson’s glory than true appreciation.

It was a gesture more about honoring each player’s own social conscious instead of honoring one of the most important Americans of the 20th century.

“In honor of Jackie, Major League Baseball is taking the unprecedented step of retiring his uniform number, No. 42, in perpetuity,” commissioner Bud Selig said then. “No. 42, from this day forward, will never again be issued by a major league club.”

Apparently, “perpetuity” and “from this day forward” means 10 years.

It’s not an honor. It’s a lame shout-out.

Before baseball, he was an officer in a segregated Army, refusing to submit to Jim Crow laws while there.

After his career, he was the president of a bank, a corporate vice president and a writer.

As an activist, he was a contemporary of Martin Luther King and Malcolm X. He campaigned for presidential candidates on both sides of the aisle — Democrat Hubert Humphrey and Republicans Richard Nixon and Barry Goldwater. Of politics, he said, “It would make everything Iworked for meaningless if baseball is integrated but political parties were segregated.”

After his death in 1972, Robinson received the Congressional Gold Medal and the Presidential Medal of Freedom.

It is a legacy current players of any color will never reach.

It is a legacy Los Angeles Angels left fielder Garret Anderson kept in perspective when asked why he won’t wear Robinson’s No. 42: “I just don’t feel I’m worthy of it.”
— Kevin Brewer

This article originally appeared in The Washington Times on April 17, 2007.
Posted by Kevin Brewer